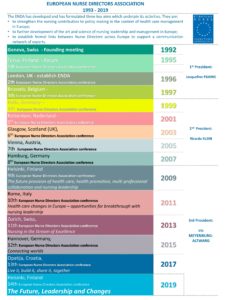 Economic, demographic and structural changes affect all areas of the professional nursing role. Especially nursing research, nursing education and nursing management are confronted with the essential reorganization of the concepts and structures. This is one of the reasons why in 1992, in Geneva, Switzerland, a group of Nurse Directors gathered with one aim: to build a network of Nurse Directors that will support the development of nurse leadership in Europe.

But where to start? Their first goal was to call out for their colleagues in Europe by organising a congress in 1993. This congress was a huge success. Those present adapted the idea and the name they chose was the European Nurse Directors Association (ENDA). Not so creative but very effective a statement that this association was meant for those nurses who worked in leadership positions, at decision-making level in European healthcare settings.

In 1995 in Turku, Finland, the statutes were presented and the congress participants decided to establish a Standing Committee. Each country present should delegate one person to become an ENDA member. At the Brussels congress in 1997 ENDA was formally founded and chose a Board out of the country representatives. This congress was focussed on the specific situation of health care leadership in the different countries. As mostly Western European countries were present ENDA decided to reach out to their Eastern colleagues and so the 4th congress in 1999 was held in Halle, Germany, in the former DDR. During this congress the first tentative plan was presented for the next four years and formal contacts were established with the WHO and the PCN.

During those years ENDA conducted a research project (SWOT analysis) on the strengths and weaknesses of Nurse Directors’ positions in their own country. The results were presented by Jacqui Filkins and Ricarda Klein during the 5th congress in Rotterdam, in 2001. As a part of this presentation some key themes were outlined and pointed out for the Glasgow conference in 2003. In 2005, in Vienna, the ENDA looked to the future and presented its action plan.

On 8th June 2007 ENDAbecame a registered association in Hamburg, Germany.

Some outcomes of ENDA activities are:

Some time ago the Committee took the decision that ENDA was not only an organization for Nurse Directors but for Nurse Leaders within all areas of healthcare including Primary Care, Education, Research etc